Sometimes that gets me into trouble.

The other day our toilet seat broke. One of the hinges on the back snapped off. (Perhaps we should consider diets.) Anyway, it was time to replace it so I looked at the seats that were available at The Home Depot. Thirty dollars for a toilet seat! Ridiculous. It’s a toilet seat for crying out loud. You sit on it, do you business and move on. Surely, I could get something for less than thirty dollars.

So I checked out the Walmart site.

They had a wooden seat available for eighteen dollars. Now we’re talking. Under twenty bucks, made of wood, none of that cheap plastic and on top of that, it got lots of good reviews.

I drove to Walmart to check it out. Yup. Looked good. Solid construction, enamel coated and built like a tank. The thing should last me for years.

Made the purchase, drove home and installed it. The installation seemed a little weird. Instead of bolting the seat directly to the toilet, you install the plastic bolts in the holes on the toilet, slide the seat on to the bolts, tighten the bolts down and snap shut the covers.

I did the first two steps but skipped the third. I didn’t want to overtighten the bolts and risk breaking anything so I went lightly and left the snap on covers up thinking in a week or so I could tighten them up a bit more if they loosened up.

That was a mistake.

After using the toilet for the first time when I went to get up, the seat shot off the bolts landing my backside in the water and the seat on the ground. Luckily no injuries were sustained. Should have tightened the damn things. My fault.

So I redid my work; this time tightening the bolts snuggly and and making sure that the covers were on tight. That seemed to do the trick. The seat was on solidly now. There would be no chance of an embarrassing accident and an awkward conversation with the paramedics.

I thought my problems were solved until we started using the thing. The seat and cover were really heavy and if you let them loose while closing them, they would crash down on to the porcelain toilet with a big bang. One time I just attempted to put the seat down and the cover came crashing down catching my thumb between the cover and the seat. It hurt like hell and the thumbnail is still aching.

I finally came to my senses. The risk of injury or cracking of the porcelain toilet from a falling lid were just too much. I figured it was just a matter of time before something bad happened, so I went to The Home Depot and bought the thirty dollar seat.

So now I’m out fifty bucks. Twenty for the unusable seat and thirty for the good one. If that’s not enough, I think I’m going to lose my thumbnail.

Sometimes it doesn’t pay to be cheap… I mean frugal.

The People vs The Hedge Funds

I saw this on another board and thought it was perfect. I couldn’t agree more.

Bow to your Feline Masters

And the Answer is… Ken Jennings

I was never a big fan of Ken Jennings. He always seemed a bit arrogant and to top it off, had that Howdy Doody look going against him. When they announced him as the potential successor for Alex Trebek I cringed.

Jennings? How could you even consider him?

Turns out I was wrong. Jennings has turned out to be perfect in the role. He knows the game, has the proper credentials and seems really comfortable hosting the show. The producers shouldn’t look any further, they s should stop looking and make Jennings the full time host.

I spoke with a friend today who was excited because his daughter gave birth to a beautiful little girl this past week. After the conversation, he sent me a text with pictures of his granddaughter and a picture of his his daughter Jenna as a baby so I could see the resemblance between the two.  My reply to his text was the following:

“Amazing how alert your granddaughter is. Jenna looked a bit chunkier as a baby but she’s beautiful now.”

Luckily, I checked the message before sending it because the auto-correct had the corrected the sentence to this:

“Amazing how alert your granddaughter is. Jenna looked a bit chunkier as a baby but she’s beautiful nude.”

Oops. He would have found it funny, but I’m glad I caught it so I didn’t look like an old perv.

At the local CVS

I think I’ll stick with the Coco Mint flavor.

“ANCHORAGE, Alaska — Two people died in a rural Alaska village when their snowmobile struck a moose.”

“Investigators say 28-year-old Charles Lang Jr. and 16-year-old Kayden Morgan were traveling by snowmobile on an Aniak road when a moose stepped out.”

“Troopers say they believe alcohol was a factor in the crash.”

So was the moose drinking?

Even if Dad hadn’t had a drink or two, having a moose step out in front of you while speeding on a snowmobile probably seals your fate. It doesn’t seem fair to blame alcohol on this one. 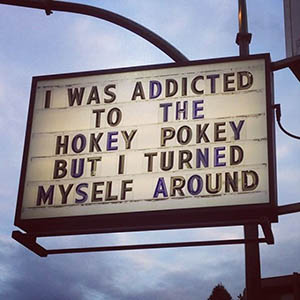