Back to Wachusett Mountain once again for another hike.  I’m trying to get into shape and spending endless hours on the elliptical is no fun so I figured maybe hiking would be more interesting.

After last weeks hike I came home, took a shower and inspected myself for ticks.  All clear.  Or so I thought.  Tuesday morning I got up at 4:30 AM to take my shower before heading off for work and while scrubbing I felt something on my backside.  Naturally, it was in a place that I couldn’t see so I had to wake my wife up to have her take a look.  What a way for her to start her morning, checking my ass for ticks.  She was a trooper though and didn’t complain.

Sure enough, it was a tick.  She got out the tweezers, I bent over and after some gentle coaxing, the tick was extracted and flushed down the toilet.  The thing was fully engorged and I was able to get my doctor to prescribe some Doxycycline to guard against Lyme disease.  Since I don’t have a spleen (work accident a few years back) this was even more important because my immune system has one less defense in dealing with intruders.

So this time I applied even more Permethrin to my clothing.  Coated myself with 30% Deet.  Tucked my pants into my socks and tried again.

I found a loop trail on AllTrails that seemed like it would be a good workout.  It ran 2.9 mile total and started out with a trek to the summit.

I started at the Visitors center, followed Bicentennial Trail to Pine Hill Trail and started my climb upward.  Along the way I met a couple of young women that were working to get in shape to climb Mount Washington in six weeks.  Their secondary goal was to be in good enough shape as to not embarrass themselves in front of a third woman who was in great shape and would be hiking with them.  All of us were hurting, so we were taking frequent rests.

I asked them about Mount Washington, which they had hiked multiple times in the past, and they said it was much more difficult than Wachusett.  I can’t imagine what it must be like.  I was struggling big time and I felt I was doing more rock climbing than hiking at times.  So for now, I’ll be avoiding Mount Washington.

I continued on, finally making it to the top.  It was cloudy and the visibility wasn’t great but you could still see for some distance.  I climbed the tower, observed lots of honeybees sitting on the railings of the platform; very strange, and then started down. 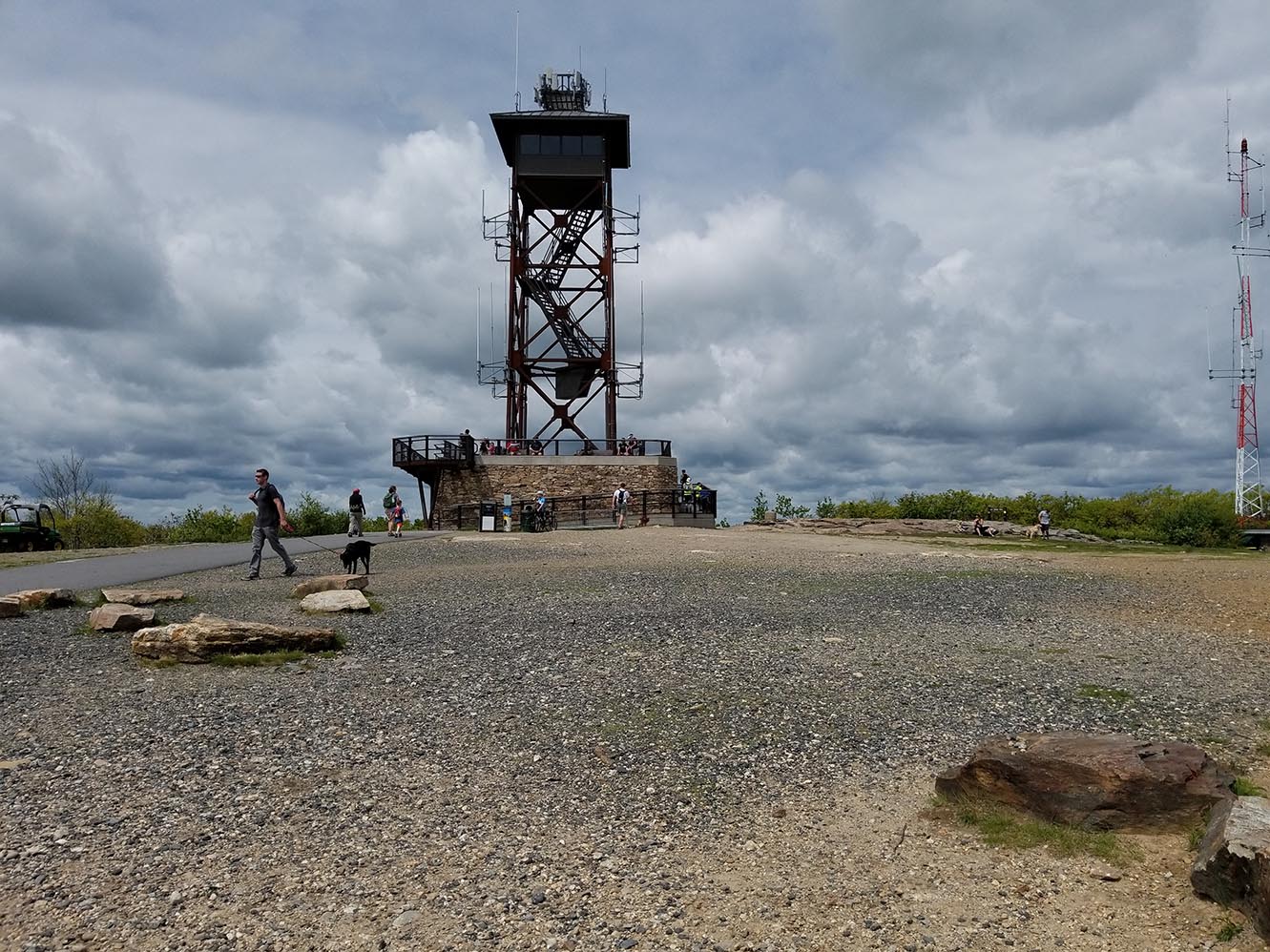 The AllTrails map that I was using said to follow Harrington Trail down.  I took a look at the beginning of the trail and even though the hike was rated as moderate, the trail itself was marked as hard.  I thought about it for a few minutes.  Did I really want to chance this or wimp out and head down the access road instead.  I decided not to be a pussy and started down Harrington. 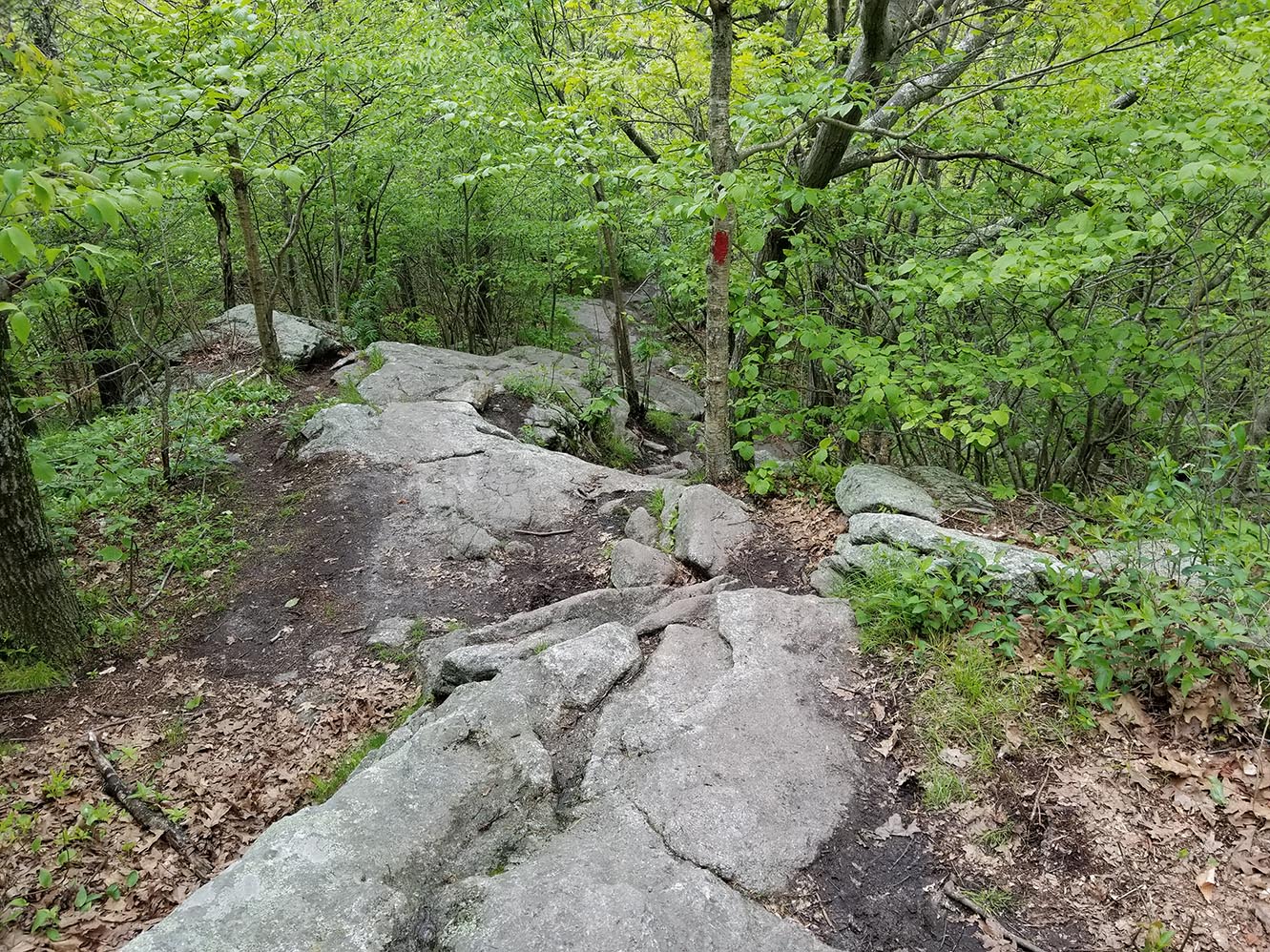 Harrington Trail. The picture does not do a good job showing how steep this really is.

It was pretty steep.  On top of that it was really muddy; we’ve been having perpetual rain this spring and everything is a mess with mud.  I was considering going back, when I ran into a girl climbing up the trail with her dog.  I asked her how the rest of it was.  She told me it was rocky, muddy and a bit slippery.  I asked her if she thought I could make it down at which time she pointed to her little dog and said, ‘He made it up, you should be able to make it down.’  I countered with, ‘He has four legs and I only have two, on top of that he’s a lot younger than me.’  She looked at me, kind of disgusted, and continued on.  I decided what the hell and continued down. 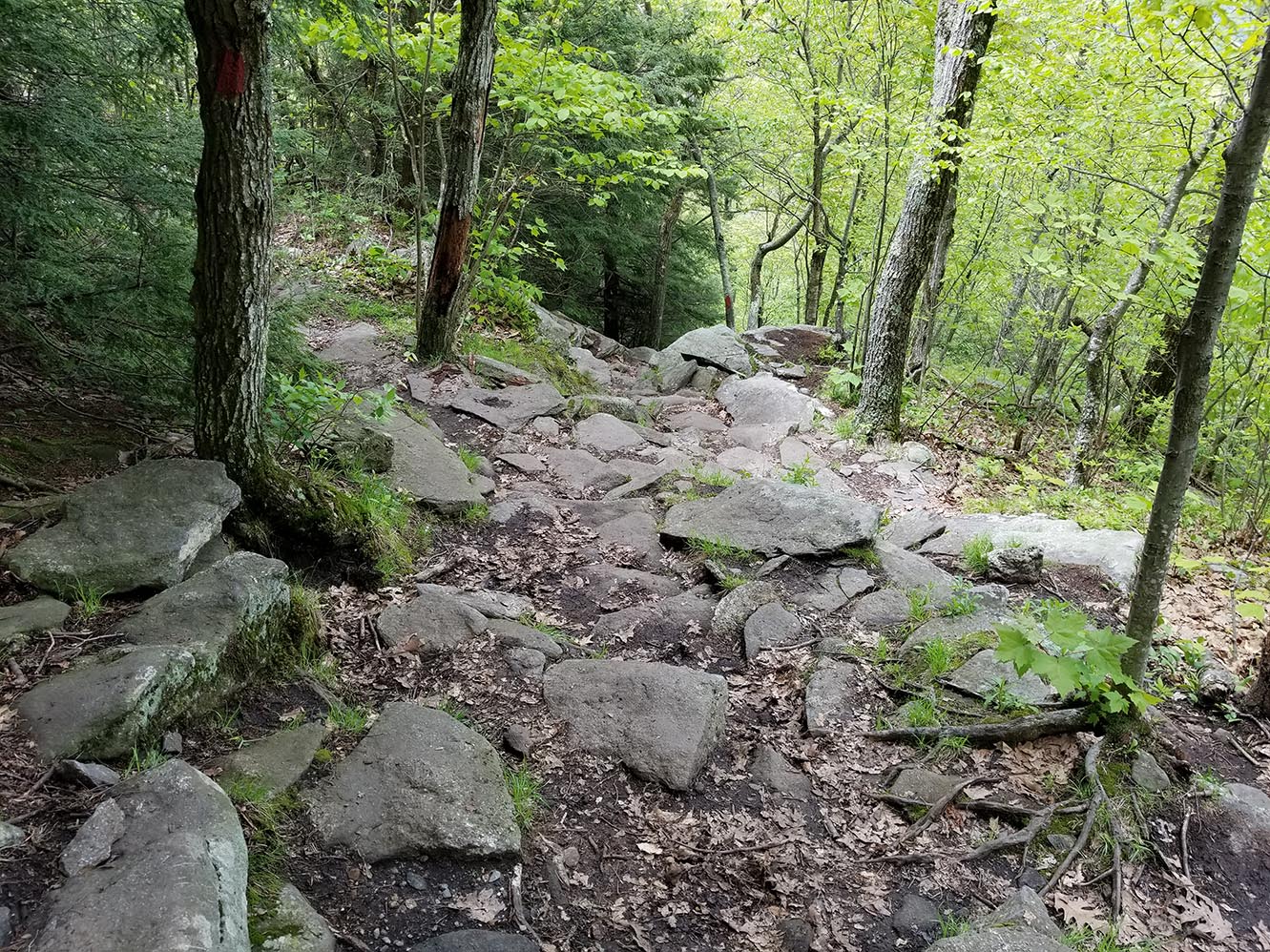 Harrington Trail. Note how the trail just falls of the end of the earth in the distance

Thank God for trekking poles.  The trail was rocky, muddy, moss covered and slippery.  More than once I almost slipped down and was saved by digging my poles into the dirt.  I finally made it though and had to make a decision.  The AllTrails map that I was using had me taking Jack Frost Trail and looping out adding another 1.5 miles to my journey.  This wouldn’t be much on flat ground but if every step of it was rocky, like the trails that I had dealt with up until this point, it could get pretty miserable.  The tough part was that once I committed there would be no turning back, it was all or nothing.  I decided for the sake of my knees I would cut it short this time.  I took Old Indian Trail to the Loop Trail and finished the hike on Bicentennial. 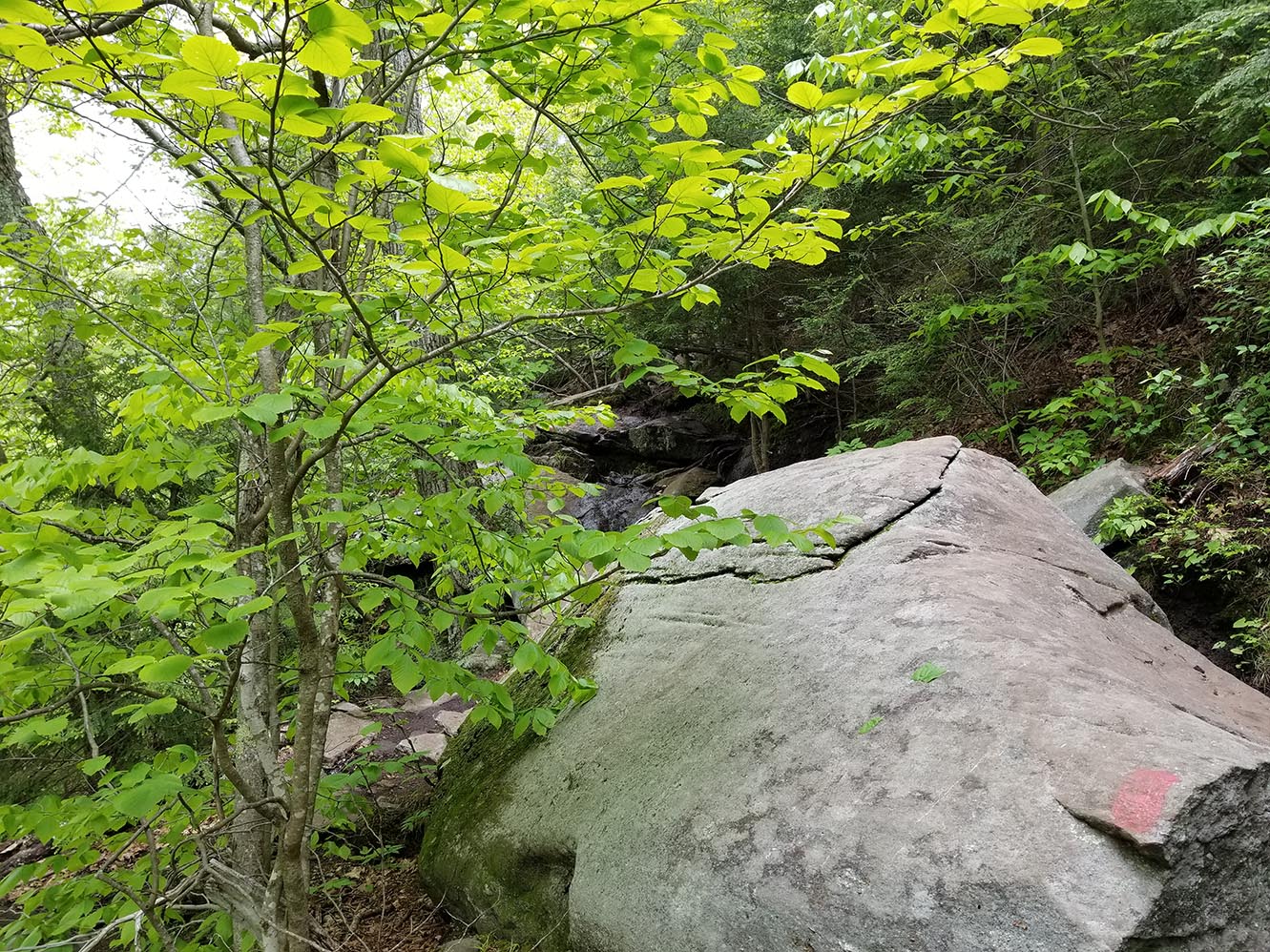 Link Trail. The dark area at the center top is where I’m heading, but first I have to get over this big rock blocking the way.

While on Bicentennial I ran into an Indian family.  The little girl, probably around 10 or so, stopped me and asked me if I’d do something for her.  I said sure and she told me she had lost her sunglasses while coming up the trail and if I saw them on the way back would I drop them off at the Visitors center.  She was really sweet and adorable and I so hoped that I would find them because it was obviously pretty important to her.  Sadly though I never saw them.

The hike was fun but tough.  As I said before, it was rated as moderate, but required a lot of climbing up and down rocks so it seemed pretty tough to me.  Since I have little to compare it to, I’ll just have to trust the experts on this.