I’ve been reading Robert Bruce Thompson’s blog for about as long as I’ve been on the Internet. Bob was a really smart guy that always has something interesting to say and was never afraid to say it.

With the help of his wife, Barbara, he wrote a series of science books that were used by many homeschoolers. Here’s a list of some of his books:

Illustrated Guide to Home Chemistry Experiments: All Lab, No Lecture

Illustrated Guide to Home Biology Experiments: All Lab, No Lecture

If you’re interested in science or have a child that is, these are well worth picking up. They are well written and fun to read and experiment with.

Sadly, Bob died Saturday night. He had been in the hospital since early November with what first appeared to be just a bad lung infection. It turns out what was thought to be a lung infection was actually heart failure. They performed bypass surgery on him which seemed to go well, but they never seemed to be able to get a handle on the lung problem. Things seemed to be looking a little better recently, but then his wife received a call on Saturday that Bob had passed away.

Over the years I’ve had the pleasure to read and be educated by a lot of smart people on the Internet. Bob was one of them. He will be missed.

When I was growing up, my family collected boxes from all the high end stores.  Every time they’d buy something in Jordan Marsh, Remick’s, Gilcrest’s or any other perceived highfalutin store, they would ask for a box or sometimes two.  Come Christmas time they would have a collection of boxes from these places and the gifts that they bought from Kresge’s, Woolworths or Zayre’s would get wrapped up nicely in those boxes (always with tissue paper) and given to friends and relatives.

It wasn’t that we were cheap bastards, we were just poor bastards.

When the person receiving our gift unwrapped it, they would always ooh and ahh over the box and how special it was that we got them something from that store.

I don’t think they were fooled.  In fact, most of the gifts we received were also in boxes from all the best stores.  Since most of our friends and relatives were also poor people, I’ll bet they were engaging in the same deceit that my family did.

If Jordan Marsh made a business out of just selling their boxes, they’d probably still be in business.

Guess What’s In The Box

Guess what’s in the box.

This may be the most extreme case of over packaging I’ve ever seen. The container makes it look like it’s something of great value but in reality it contains nothing more than a piece of tempered glass film used as a screen protector for a camera. Sandwiching it between a couple of pieces of cardboard would have worked just as well but the box does add a bit of extra class to the product. 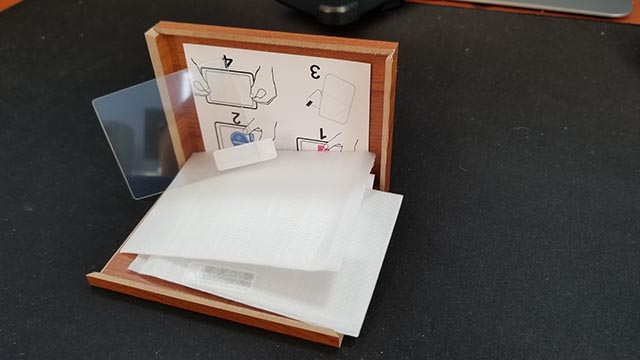 As for the screen protector itself; it’s top quality and comes with the appropriate cleaning pads to clean your camera’s screen before installation. I’m really pleased with this and can highly recommend it. $9.99 is a small price to pay to insure that the touch screen on the back of my camera is not damaged.

How I Spent My Saturday

About a month ago we had a dead tree taken down and we decided to keep the mulch to use around the property. Since we are entering snow season, I was afraid that we’d have a major snow storm before I got a chance to take care of the pile, which would make things really tough when it came time to plow the driveway. Luckily, the weather today was just perfect to do that type of work so I spent the afternoon shoveling mulch into a wheelbarrow and depositing the mulch on a path down our hill. It went well but it was hard work.

The picture of the pile doesn’t do it justice since it’s taken from above which makes the pile looks smaller than it actually was.

I’m thankful that the Pilgrims had the foresight to have Thanksgiving on a Thursday, the day before trash day, so that it’s easy to dispose of all of the leftover trash.

I wonder how they knew?

I was saddened last night to learn of the death of Jerry Pournelle.

I never met Jerry, but I was certainly influenced by him.  In the early days of computers, he wrote a column for Byte magazine and it was the first thing I would turn to when I received my issue.  He was also a science fiction writer that wrote a number excellent novels.  His collaborations with Larry Niven are some of the best sci-fi books in the business.  He also was one of the first people to have a blog on the web.  Chaos Manor (http://www.jerrypournelle.com) has been one of my go-to sites for years.  Jerry always posted thought provoking articles and user comments.

Sadly, in recent years, his output dropped off due to health reasons.  A few years back he had a stroke and a bit later his wife experienced the same thing.  Life can be cruel at times.

He had been sick for a while; always seeming to be fighting off some health issue.  Last week I was pleased to hear that he had attended DragonCon in Atlanta, Georgia.  I thought it might be that things were getting a bit better for him.

His last post to his blog was on Sept 7th.  He ended it with this:

Unfortunately, there was never a ‘later.’

People impact us in different ways, and although I didn’t know him personally, reading his blog was always part of my day.  But, no more.

Jerry will be missed.