A boy mowing the lawn is about American as apple pie. For a great many of us it was the first job we had when we were growning up.

Earlier this week, we were treated to the story of Frank Giaccio, an eleven year old from Falls Church Virginia, who wrote President Trump saying that it would be his “honor to mow the White House lawn.”

The president took him up on his offer and Gaiccio did the job telling Fox News, “So far it’s pretty much the best day of my life.”

Nice story. Hard working, self starter, showing ambition and drive. A story that should make everyone happy.

Not so, Steven Greenhouse, former labor reporter for the New York Times.

Sounds like the rantings of yet another loony lefty with a bad case of Trump Derangement Syndrome. 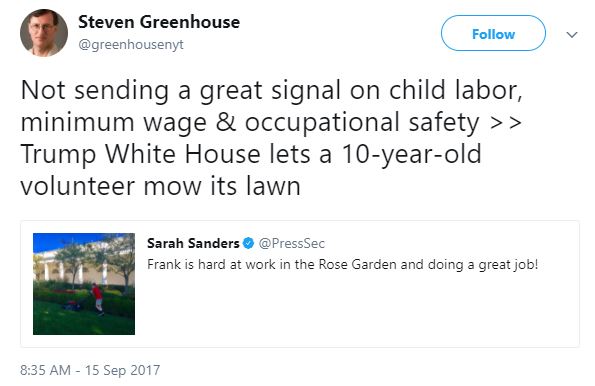 Transgender Mafia and their Woke Mob

The Most Acquitted President in History

A Dark Day for America

And the Answer is… Ken Jennings