An article in the UK Daily Mail had the following title, “Black 12-year-old boy mowing lawns for the summer has the POLICE called on him by a customer’s neighbor”. They followed it with a quick summary of the article which included, “It is similar to another incident in San Francisco, where a white woman dubbed ‘Permit Patty’ called the cops on a black girl, 8, for selling bottles of water.”

OK, if you don’t go any further you are now left with the impression that those horrible, racist people in America are once again discriminating against a poor little black kid. If you continue scanning the article, it becomes apparent that this is not true. Further down in the article, they show this picture of the neighbors who called the police on the boy: 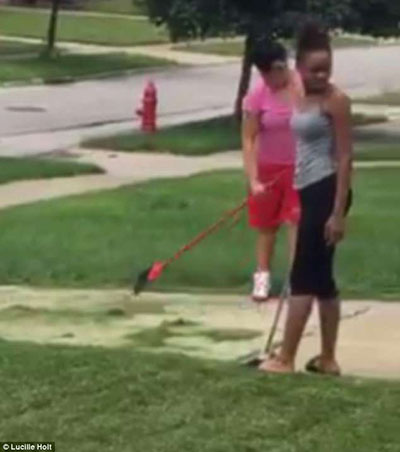 Two women, one who is clearly black. Possibly a lesbian couple?

If a black women calls the police on a black boy is she racist?

Why did the Daily Mail feel the need to tell us it was a ‘Black 12 year-old boy” but never tell us it was a black woman that probably made the phone call? If it weren’t for the photo, we would never know this important detail.

Further reading provides some even more interesting information, “Both Reggie’s mom Brandy Fields (left) and Lucille Holt (right) were furious the neighbor called the cops on the youngster.”

Could this just be a cat fight between a couple of crazy lesbian couples and have nothing to do with a boy mowing the lawn?

This is why people hate the media. Instead of reporting the news, they push an agenda.

Some Times You Just Get Lucky

The Most Acquitted President in History

A Dark Day for America

Throwing it all Away